Welcome to our updated store! We're currently in the process of updating our site.

This quaint origin story begins in the year 2011 in the humble abode of founder Andrew Frahm's room where he took it upon himself to repair his own iPhone 4 (which was successful even after missing a few screws).

The name Kixup was actually originally crowd funded for a previous startup. Andrew founded called Kixup Online Budgeting, an app for managing your personal budget. While this app didn't go ahead as planned the Kixup legacy continued and in 2014 Andrew was the go-to man in his circle of friends and family to repair their phones.

Kixup iPhone Repairs really started to grow as referrals started coming in from different local businesses such as the Telstra shop in Mount Isa who was giving him 1-2 repairs a week. The garage he was working out of started becoming a little too small. So 2016 came around and it was time to officially open an office - Hello West Street, Mount Isa. With all the busyness, a few months later we had our first staff member. There was still one issue, because of our name it was only iPhones that people came in wanting to fix up (with good reason). And so Kixup iPhone Repairs became Kixup Repairs.

3 years later as the business grew we relocated to a new home on Simpson Street in January of 2019. By the end of the year we had 3 staff members and had done over 6,000 repairs. 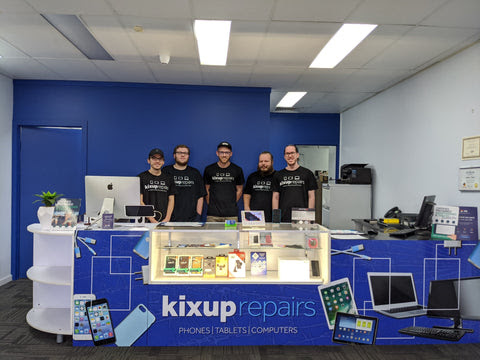 Now operating as a business for 7 years we officially opened a new store in Gladstone, QLD in March 2021 to expand our passion and desire to help keep people connected to their loved ones through the devices in our pockets.

Be WOW: Exceed Expectations and seek to amaze in every interaction.

Always Be Learning - take ownership of your own growth.

Be respectful, have integrity

The above list is what our team pride themselves on, and they're the same reasons we WILL look after you.

To enable people to stay connected with each other longer. Andrew grew up in Gympie and moved to the Sunshine Coast after high school where he attended university. After completing his degree in IT, he began working for a software company where he travelled Australia and the world implementing software for big businesses. Within his 10+ years of experience in the tech space he became a father in 2018 to his son, Ahren. He loves playing sport, having played soccer since he was 5, getting to a state level in his late teens. Andrew also likes all things tech, travelling, and more recently flying drones.

Natalie currently lives in Townsville after happily moving there after living in Mount Isa for 10 years. She first started working for Kixup while living in Mount Isa as a front of house extraordinaire...basically she booked all the devices in, kept the place tidy and looked after the customers 😉 She now looks after the bookkeeping for us here at Kixup. Tom currently lives in a campervan travelling Australia while working his magic and marketing for Kixup. He's been a videographer and photographer for over 8 years shooting mainly travel content for brands such as Warwick Hotels. Health and environmentalism is a huge passion of his and he runs marathons for fun.

Tyson was born in Tamworth NSW, making him a blues supporter by law. He moved to and grew up in Mount Isa with 3 older brothers and 2 older sisters. Upon finishing high school, he became the first in his family to head to University, studying Computer Science on the Gold Coast. Afterwards returning to Mount Isa and starting at Kixup. When Tyson is not working he enjoys playing games on his PC, and also liked to dabble in Kendo while on the Gold Coast.

Scott grew up in Gladstone and has worked all around Australia as an IT Technician for a number of large construction companies. He is currently studying a BSc Computer Science and Cyber Security. When not working Scott is kept busy with his 3 kids, enjoys playing PC and taking his 4WD out camping.

Warren grew up in Wollongong and has lived in Queensland for the past 26 years. Warren holds a year 10 Certificate and Cert III in Electro Technology. He is currently in a relationship and has raised five children and three grandchildren with one on the way, he loves his daughters dog Franky and his hobbies include music, fishing, camping along with others. Local to the Gladstone area, Tom is passionate about technology and helping people. His hobbies include gaming, learning and fidgeting with tech, and helping friends with their streams. He has a pet dog that is almost 16 years old.

So that's all about us, but there may be one thing you still have yet to discover. How good we are at repairing devices! If we haven't magically fixed something of yours, you are truly missing out. Contact us or head over to Book A Repair to get your repair journey started!